There’s a wonderful song in the film Willy Wonka and the Chocolate Factory, starring Gene Wilder. It’s called Pure Imagination and has the following lyrics:

We spend quite a bit of time in our imagination and contrary to popular belief, not all of it daydreaming! Whenever we are faced with a business challenge, we look to answer it creatively and the global pandemic has certainly presented us and our clients with a sizeable challenge. I wrote this challenge on the whiteboard a few weeks ago, so I could be clear exactly what it was we were dealing with.

“In-person conferences and meetings can no longer be held and we are all experiencing ‘zoom fatigue’, seeing only the head and shoulders view of ourselves and others, and in some cases, only a faceless silhouette.  The picture never changes or moves, except to get smaller on gallery view, or change to a power point slide.”

The zoom fatigue is hardly surprising, since it is not only work that requires our online presence.

I don’t know about you, but in my household during lockdown, zoom sessions have included company calls, client meetings, leadership coaching, a business support group, TEDx circle, friends and family, therapist, singing teacher and the vet!

In fairness, animals have featured in video calls everywhere and often been the highlight and our friends and family chat I imagine is fairly typical, where we’ve heard from dogs, cats, chickens and on a very special day in Thailand, a rare tortoise.  It didn’t say that much, but it didn’t have to, it was still the star.

Whilst doing our best to bring stimulating content and high energy to Zoom and Teams meetings, it was clear we needed to do more. At first we invested in some better kit for our home offices and with our new microphones, ring lights and webcams, we were able to at least show up clearly and be heard – although we’re still not entirely sure about the white circles in the pupils! As we would do, we spent a bit of time clowning around on calls and passing chocolate bars to each other across the screens and then began to read imaginary news and weather to each other, using two cameras. A short step from this playfulness, saw us using portable green screens to play with different backgrounds and environments, but despite the fun, we were still, at least metaphorically, chained to the desk. 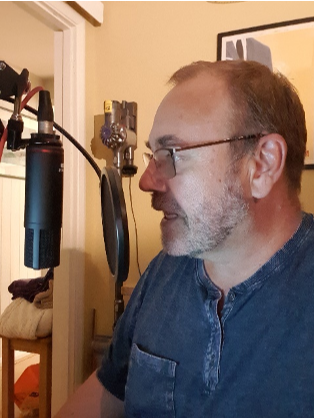 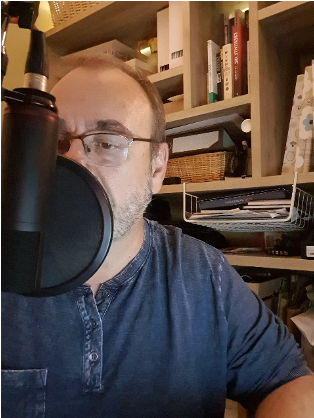 We have also used our creativity to break up lengthy video conferences and set exercises and activities designed to stimulate the body and the mind. Sure, you can set a quiz, but by the time you’ve done your third quiz of the week, or answered the fifth polling question on a Teams call, it really is time to get up and do something else. We’ve asked people to draw, to DJ, to use their bookshelf as a source of mindfulness, send pictures of their desk, film a guided tour of their house and share their favourite chair yoga positions. We’ve been doing our bit to help alleviate my bad back, my dodgy knee and rapidly failing eyesight and hopeful helping others do the same.  But still, the same lingering feeling of being hamstrung was there. 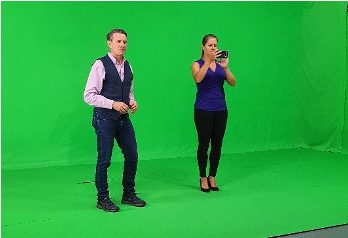 Fast forward (another fun theatrical technique used in conferences by us, or rewind) to Monday this week and as the country slowly emerged from lockdown, we took an opportunity with local partners to create a canvas for our imagination.

It’s one small step for monsters, actually to the dance studio above our office, but a giant leap for expression and conference freedom. In an earlier life, at least three of us have spent many a happy hour in studios making tv programmes. A lot of this work was for children’s and schools’ tv, neither of which ever had the budget to produce anything too grand, but there was never a shortage of imagination. If you needed to appear on a grand concert hall stage, well there was always green screen and a photo to use. Failing that, just ask the audience to close their eyes and imagine one – we’ve done quite a bit of that on our conference calls as well. 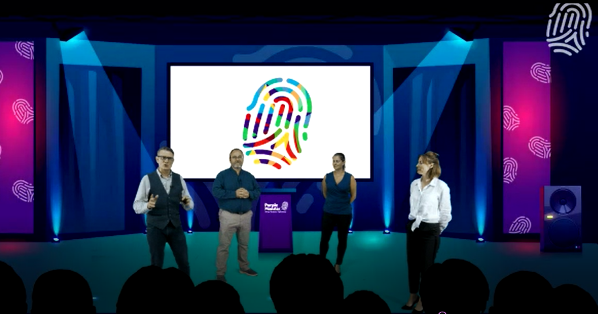 So taking the opportunity to be in a working space together, albeit socially distanced, we have been experimenting with virtual and hybrid conferencing.  We can’t bring an audience to a conference, but we can bring the conference to an audience. Freeing our facilitating selves from the oblong box was a genuinely liberating experience. Moving about in front of the conference screen and set gave us energy and reminded us why we do what we do and just how much fun it is. With the wonderful artistry and graphic design skills of Alana and Craig, we can place ourselves in any environment we wish and with the technical know-how and execution of our partners at Noisegate Media, we can live stream at the same time.

This is a step beyond our kids’ tv days, where everything was done in the edit suite. With modern technology, Matt and his team (well actually Ben, his technical wizarding son) can ‘key’ the pictures in real time and interact with platforms like Teams and Zoom. It is great fun, as you can see from some of the pictures, but it is something that we are going to continue to work at, work on and work with, because this way of delivering conferences and events is going to be with us long into the future.

Indeed, it has sufficient economic and environmental advantages, that although it will never replace live events, it will play a significant part in the future planning for large and small businesses alike. 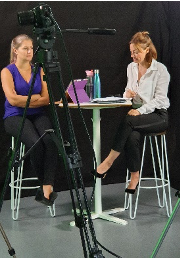 It’s not just the green screen environment, because as our ‘chat booth’ shows, we can also use a simple set or plain background and still create the feeling of an event that delegates are attending.  Our focus for any conference or event is on participation and creating dialogue and this is no different.  By combining the best of both the broadcast and communication platform worlds, you can utilize live chat, breakout rooms and hold video conversations with attendees, pre-planned or spontaneous.

Testing and rehearsals over, we are looking forward to our first ‘live’ outing with some of our lovely clients at Mondelēz International.  Judging from today’s Teams call, they are equally excited, with just a touch of nervousness for good measure.  Looking back on our live tv experiences, this is exactly the right mix.  With all the right planning, everything should go smoothly, but the ‘live’ element adds a certain frisson.

During rehearsals on a well-known Saturday morning entertainment show, I was given ‘the sound of applause’ as the cue to stop an item by the director.  “Got it” I said.  “When we hear applause, we stop”.  On the day, three minutes in to our seven-minute routine, there was a huge unexpected round of applause.  It had come from the live family audience who weren’t present at the rehearsal.  They were so amazed by our club-juggling, they burst into spontaneous applause.

So I stopped, smiled, and said ‘Thank you’ to camera 3.  There was then a very long and painful pause, the sound of muffled screams from the control gallery, and about 1 minute later, Phillip Schofield, the main presenter, burst through a part of the set, smiled and carried on with the next item.

The good news is that we don’t have a set, but what we do have is a totally blank canvas and a collection of artists ready to fill it for you.  You can theme it how you like, brand it how you want and go anywhere your imagination can take you.  That’s our invitation and one I hope you’ll take up with us.  It you’d like to create a unique experience for your upcoming conference, functional meeting or project kick off, then do get in touch or you can find more information on our hybrid conferences here.  Whilst we have this space to play in, the only limit to where you can take your audience, is your imagination. 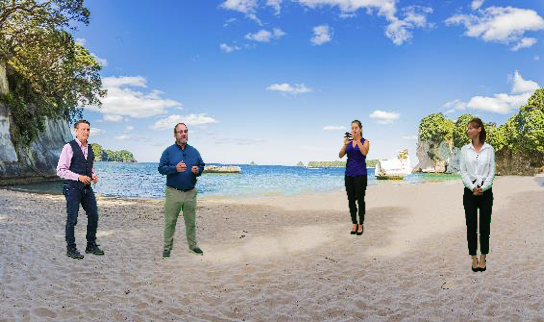 Connect with us here for ideas, fresh content and tips on challenging the norm.